What is a Hip Fracture? 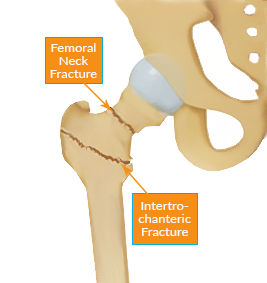 Hip fractures are very serious injuries that need immediate medical attention. It can be life-threatening. As we age, our risk for a hip fracture rises.

Due to osteoporosis (bones weakening), hip fractures become more and more common in the elderly. Occurring most commonly in those over the age of 60. One of the most common causes of a hip fracture is trip and falls. These typically happen in those taking certain medications. These medications cause poor vision and imbalance. Therefore being more susceptible to experience a hip fracture.

Symptoms of a Hip Fracture

When a slip or fall happens there are some tell signs of a hip fracture. Those symptoms include:

Causes of a Hip Fracture

Although hip fractures are more common in those over the age of 60, anyone can experience one. However, it’s only common from severe impacts, such as a car crash.

As mentioned previously, the elderly are most likely to encounter a hip fracture from a trip and fall. In people with weak bones, this can even occur from simply twisting a leg.

The risk of a hip fracture increases with:

A doctor can often determine if your hip injury is a fracture by simply examining you. However, an x-ray will confirm the location of the fracture and severity. Although, sometimes an MRI will be necessary.

It’s typical for hip fractures to commonly occur in one of two places, the femoral neck or the intertrochanteric region. The femoral neck is located in the upper portion of your femur, just below the ball and part of the ball-and-joint socket. The intertrochanteric region is a little farther down from the actual hip joint and in the portion of your upper femur. Although several more types of fractures are possible, these are the two most common.

Our teams of qualified and skilled physicians provide a personalized experience in a caring and comfortable environment to enhance the quality of life of our patients. Utilizing the latest medical technologies and treatments, our staff are committed to delivering convenient and valuable services to meet the needs of the community.

We'd be more than happy to assist you